Amazing Day – ALL THE WAY AROUND! 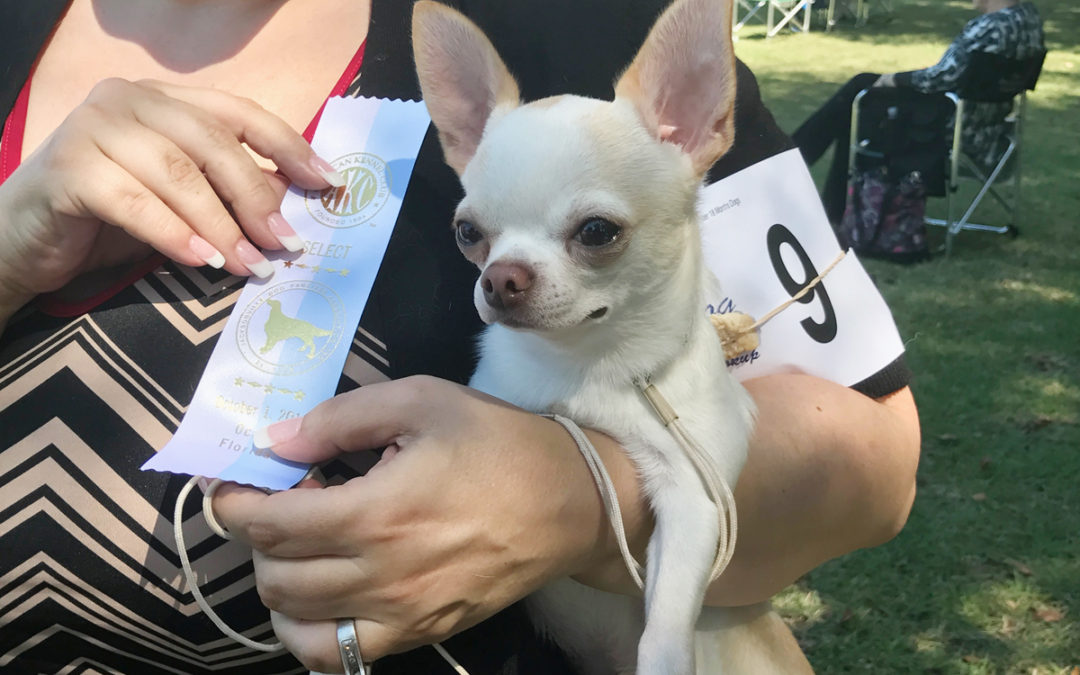 So I started today thinking “we’ll just go with it”. You see, This is Georgie’s second weekend of “move up” entries and just as with last week I planned to just go through the motions because I already paid the entry fees. In my mind he still has a ways to go in the maturity department and he is not quite”Specials” material. Then we had the fact that Australian Shepherds and Chihuahuas were going in the ring around the same time, I wouldn’t be able to watch Alexis and Pryia make their debut in the breed ring at an AKC show!

I haphazardly entered the ring and had to correct Mr. Georgie several times because he just wasn’t paying attention to me at all. This was this first outdoor show in a very long time so I am sure he was completely distracted. When the judge pointed to him and said “Select Dog” I am sure the look on my face was filled with shock and confusion. She clearly saw behind his bad behavior and I was tickled pink! He earned his first major the 3 points AND his first major towards his Grand Champion title!

While I was in the ring with Georgie, Alexis was on the far end with Pryia. When she came running back to me, the look on her face is something I wish I had captured on film. Pure joy and excitement mixed with shock. SHE TOOK BREED!

There were 14 Aussies in the ring today and she beat them all! Please don’t get me wrong. When she and Boomer won breed it was exciting, but there were normally only a couple of dogs entered and he was normally the only Special. Aussie entries are always big and with such a limited amount of experience, for Alexis and Pryia to take it all – that’s HUGE! And it didn’t end there!

They headed over to Juniors and I actually got to witness that. There was a pretty big entry her in her class and a lot of tough competition. To be awarded a 4th place in such a tough class was truly awesome!

Also, the twosome won Owner-Handler as well as Breed, so this afternoon they had to got in the ring twice – Just like int good ol’ days with Boomer. Are you ready for this?……

THEY GOT A GROUP 1! We all jumped up with excitement and alexis was beyond elated! THEN – yes there is more – THEY MADE THE CUT IN GROUPS!!! OMG I couldn’t believe it! Alexis looked so calm but I am sure she was all giddy in her belly. There is was with all of the handlers – SO PROUD! And so exciting! She made it to the big leagues – 2017 is going o be am amazing year!