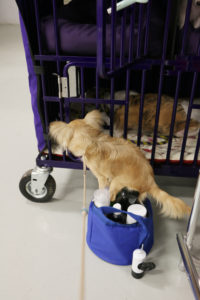 The plan for this weekend was to head to Plant City to show Priya today and tomorrow in both breed and junior showmanship. With an 8 AM ring time for juniors tomorrow, I did book a hotel for tonight and decided to bring the puppies along with Stella and Breezy for some showground socialization. Once we arrived this morning it became very clear we would have a much more active weekend. Renée was on her own both days so Alexis and I decided to pitch in and help her throughout the show.

While Alexis was the best assistant ever today, I worked on socializing the puppies and Stella. Walking them on leads, having strangers walk up to them, even stacking them to allow people to go over them, it has been a truly successful day for us all. The puppies did a fantastic job on their leads with only 10 minutes of training. Stella was on the timid side when I put her on the lead – going to far as to try to crawl back into the trolley! After about 10 minutes she did calm down and walk a little bit. That’s progress!

Alexis showed just how far she is come and became a true asset for Renée. From running dogs, getting them ready for the ring to even handling a group placing Pug! Of course she also showed her Pryia in the Junior ring. She was a bit off in the ring though, worried about her drastic new haircut. Now that we have that out of the way, tomorrow she will blow them all away!!!!

Dremel Time
I See A Lot Of This In Our Future